Foday Ceesay was born in 1978, and brought up on a small family farm in Damphakunda, The Gambia. Foday came himself to Europe as an economic migrant. It took him nine years to reach Europe and his long journey took him through Mali, Algeria, Libya, Egypt, and Tunisia, before he crossed the border in Ceuta (a Spanish enclave in Morocco). After two years working on tunnels and mines in Spain, Foday met his future wife Martina Alig, while on a trip to Switzerland.

Martina Alig, born in 1981, grew up in Thurgau, before moving to Zurich. The couple met while Martina was in her first year studying Environmental sciences at the Federal Institute of Technology in Zurich. After the wedding, Martina spent a month getting to know Foday’s family and the local area in Damphakunda. The great openness and warm-heartedness of the people there persuaded the couple to spend time in the area every year. In this way Martina got to know first-hand the country and the challenges it faces.

The couple now live with their two children in Greifensee, a town in the canton (region) of Zurich. Since moving to Switzerland, Foday has often received requests from family members back home to help them to get to Europe. Knowing the risks of migrating, and the few opportunities in Switzerland from his own experience, Foday wanted to offer wanted to offer his people an alternative to travelling to Europe. With this in mind, Foday and Martina opened a bakery near to Banjul Airport in The Gambia to create jobs and income for the local people. And so the Baluo Project was born. 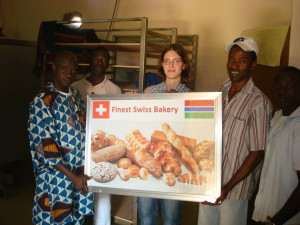